I don’t talk about my syndicate much because most people don’t find it very exciting. In brief, comic strip syndicates are the companies that distribute comics, send them to various newspapers and outlets, and handle all the business-aspects of paying and employing cartoonists. Every comic strip you see in the newspaper is there because the cartoonist is “syndicated.”

For years (and is still the case) my syndicate, American Humor Inc., has been/is considered something of the “Brand X” or black sheep of the Comics business because they’ve always been much smaller than the other 5 “main syndicates” (Universal Press, King Features, Tribune Media, Washington Post Writers Group, and Creators), and – unlike any of these other syndicates – still rep stand-up comedians and (very strange) variety singers, which is how they got their start as an agency in 1920.

Overall, I can’t really complain much.
American Humor agreed to sign me to a very long contract to do Watson just as the strip was getting started online, and still let me do pretty much whatever I want.

My editor and boss Charlie (Blintz-Ruby) is a good guy (not really) and is absolutely a hold-over from a way of doing business (and the Comic business!) from years past. (AHI also have the worst, most cryptic website in the world.) Charlie admits from time to time he doesn’t “totally get” what my strip is all about, but continues to have faith that I may one day lay a golden egg. 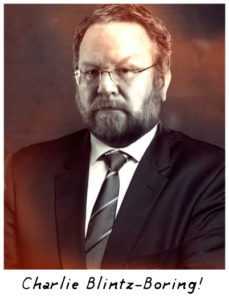 He still dreams that one day I’ll turn Watson into a multi-panel strip and/or give Fudgey parents.
He would love for “Watson” to be another “Bloom Country” or “Far Side” cash-cow, but I don’t think it’s really in the cards. Sometimes he sends me weird e-mails like “I don’t get today’s gag. It’s too werid,” but that’s why I love him.

And, in case you’re wondering, the “Blintz-Ruby” family has their weird name because when Charlie’s grandpa started the company years ago he also owned a delicatessen. I can’t remember how/why he changed his name (I don’t know what it was before), but I know it has something to do with a comedy act and the deli. I really don’t know the full story.

And, I think it’s time to draw again!
AAACK!